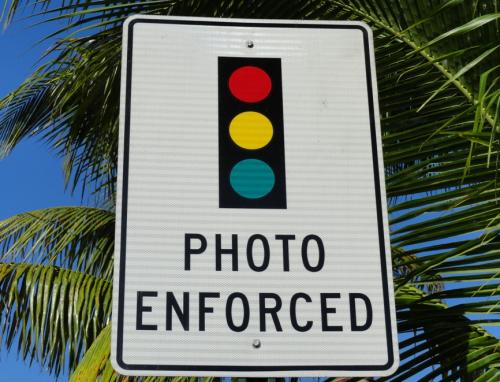 Red light cameras are fully automatic and are able to collect the necessary information needed to prosecute those who run red-lights. There is a sensor that is triggered when a vehicle passes through the intersection once the light turns red. The most common form of technology used is called an induction loop which is an electrical wire underneath the asphalt.

However, there are many different types of sensors used. Some areas use laser, radar, air-tube sensors, and video loop.

The system only turns on once it is signaled which is once the light turns red. The system won’t activate if the vehicle is already in the middle of the intersection when it receives the signal that the light has turned red. Also, some systems don’t activate until a fraction of a second after the light turns red. As a result, it is possible that some systems have a tiny bit of a “grace period”. The computer of these systems applies a date and time stamp to the pictures. They also note the intersection location and the speed of the car.

Also, the time between the moment the light turned red and when the vehicle entered the intersection. The picture along with the ticket will be mailed to the registered owner of the vehicle within a month or two. Most red-light cameras are run by third-parties and not by the cities. As a result, it is important to review the information given with the ticket carefully.

The base fines for running a red light in California are as follows:

· $35 for making an illegal right turn at a red light, and

· $100 for running a red light or flashing red light

However, keep in mind that these are the base fines. As a result, there are a wide variety of fees and surcharges that are added to the base fine. The fees will vary based on the county and city that the violation occurred. Although the value of the fines start at $35, it is not unheard of for a ticket for these types of violations to reach a value of $400.

Running a red light will add a point to your driving record which can increase your insurance rates and if you obtain too many points will cause you to have your license suspended! However, completing traffic school is typically an option to avoid a point being added to your driver’s record. Running a red light can also result in a criminal conviction because it can be considered in a reckless driving or other serious offense.

Don’t just keep their word for it! You can fight a red-light camera ticket

A red-light camera ticket is treated the same as any other ticket for a traffic violation. As a result, along with the ticket and pictures, information on contesting the ticket will be mailed to the owner of the vehicle. If you are the owner of the vehicle but was not the driver who made the traffic violation, then you will want to through the contesting process. It is important to remember that a computer is responsible for red light camera tickets and computers are never perfect.

The computer can find the information of the registered owner of the vehicle but can’t recognize who the driver was. Also, A red-light ticket can be a result of a mistake! It is very important to review the ticket and accompanying information to ensure the ticket is accurate. If you believe it was a mistake, then it is worth fighting it! It is possible to lower or dismiss a red-light camera ticket. If you decide you would like to fight a red-light camera ticket, it may be in your best interest to consult an attorney who specializes in traffic tickets to give you a greater advantage.

How Can I Know If A Red Light Camera Caught Me