A Red Light Violation (Camera) ticket will cost you $490 and Up in fines plus $1,000+ in insurance hikes and penalties. 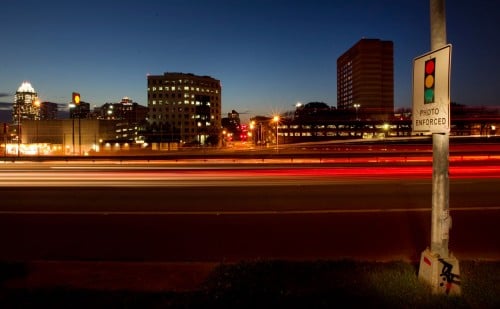 When you hear red light camera ticket the first thing you think is “Ugggh”.

They are surrounded by a ton of myths and conflicting information which we will try to clear up in this article. First California leads the nation in red light camera intersection and fine amounts. In excess of $490 these alleged violations are a headache and extremely costly.

The circumstances surrounding the legality are questionable and can be challenged during a trial but you must bring the violation to trial to have it dismissed.

Many individuals think they can ignore red light camera violations which only leads to elevated fines and collection activities. Not a good idea, don’t try it. We receive calls every day from people who ignored the violation and have been sent to collections, not a good look. It’s always better to deal with it right away. You should fight the ticket and if the citation is not dismissed then enroll into traffic school which you can easily do with GoToTrafficSchool.

Third, most red light camera violations are issued through a third party out of state camera company (Redflex). In the last couple of years, a tidal wave of municipalities have voted out the camera and chosen not to renew the contracts. With that being said more than 1,000 red light cameras are still operating in California and local law enforcement has started to test stop sign cameras in rural areas like the Santa Monica mountain range in Los Angeles.

A full stop is required at every intersection. Red light camera intersections have sensors embedded in the pavement to measure the length of the stop to ensure maximum enforcement. These intersections are calibrated with a “no tolerance” approach and even the slightest deviation from a full stop can trigger the cameras.

Everyone has been there before once or twice in their life, you see the light and think “oh I can make it, I have plenty of time”. Or you approach an intersection, no ones around and you just slide on thru “California style”. These are all common driving techniques regularly used here in California but are in violation of CVC 21453.

Section § 21453 of the California Vehicle Code creates three rules for drivers. All of those rules govern a driver’s response to red traffic signals.

The driver must remain stopped until the light changes to green or amber.

After stopping at a “steady circular red light,” a driver in California can make a right turn unless a posted sign prohibits right turns on red.

Subject to the same requirement of yielding to pedestrians and traffic, a driver can make a left turn after stopping at a “steady circular red light,” but only if the driver is turning from a one-way street onto a one-way street.

Unless the turn was completely ridiculous, whether the turn was safe is usually a matter of opinion. Our traffic ticket experts have over 50 years of combined experience and are able to exploit ambiguous facts when fighting for dismissal of the alleged ticket.

A driver who encounters a “steady red arrow” (meaning a red arrow that is not blinking) cannot legally turn in the direction that the arrow is pointing while the steady red arrow continues to be illuminated.

For example, if you are in a left turn lane, you cannot turn left even if there is no oncoming traffic as long as a steady red arrow controlling the turn lane is pointing to the left.

The defenses noted above that apply to “steady circular red light” violations also apply equally when the driver contests a red arrow violation. A traffic ticket expert can help raise those defenses in efforts of seeking a dismissal on the alleged violation.