A General Speed Law ticket will cost you $237 and Up in fines plus $1,000+ in insurance hikes and penalties. 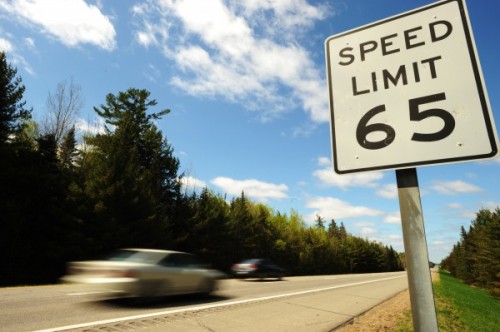 The necessity for speed limits if fairly universally held; they keep drivers and passengers safe as well as pedestrians and bicyclists. Speed limit signs are posted everywhere on every type of roadway. Still, adhering to the correct speed limit can sometimes be a tricky thing for drivers, especially in areas which have standard limits set for them – like residential neighborhoods, business districts, school zones and areas heavily populated by senior citizens.

California (and many other states) sets 25-miles-per-hour as the standard, or prima facie, speed limit for streets in this situation. However, there is a specific section of the California Vehicle Code that allows localities to increase that standard. An engineering and traffic survey can be conducted to determine the best speed limit for these areas, depending on the specific needs and circumstances.

Whenever a local authority determines upon the basis of an engineering and traffic survey that a speed greater than 25 miles per hour would facilitate the orderly movement of vehicular traffic and would be reasonable and safe upon any street other than a state highway otherwise subject to a prima facie limit of 25 miles per hour, the local authority may by ordinance determine and declare a prima facie speed limit of 30, 35, 40, 45, 50, 55, or 60 miles per hour or a maximum speed limit of 65 miles per hour, whichever is found most appropriate to facilitate the orderly movement of traffic and is reasonable and safe.

The declared prima facie or maximum speed limit shall be effective when appropriate signs giving notice thereof are erected upon the street and shall not thereafter be revised except upon the basis of an engineering and traffic survey. This section does not apply to any 25-mile-per-hour prima facie limit which is applicable when passing a school building or the grounds thereof or when passing a senior center or other facility primarily used by senior citizens.

What this means is that any town or city can have various speed limits for similar types of areas within its borders based on the conducting of traffic surveys which determine roadways where speed limits can be safely elevated above the standard 25mph prima facie speed. This vehicle code also stipulates that all those different speed limits must be indicated with proper signage. As a result, many drivers end up becoming the recipients of speeding tickets – sometimes warranted, and sometimes not.

As you may have been able to discern by the language of the vehicle code, there are a lot of factors that come into play when determining the speeds on these roadways which have to be demonstrated to be sound to uphold the citation. On top of that, the officer would still need to provide proof of your alleged speed and their ability to determine it with accuracy.

Many educated drivers tend to see speeding tickets as a fact of life. If they drive, they’re eventually going to get a speeding ticket. Drivers who receive a speeding ticket for a violation of CVC 22357 don’t have to just accept the consequences. It’s easy enough for some people to pay the fine/fees and go about their day. What they don’t take into consideration is the long-term effects of doing so.

The fine and fees for a California traffic ticket issued under CVC 22357 can vary greatly, depending on how fast the police officer states the offending vehicle was moving.

In addition to the fine, a violation of this speed law would add a point to the driver’s driving record – which will result in increased automobile insurance premiums for 3 to 5 years which can really add up over time.

If you received a citation for speeding, reach out to our team to understand the options you have available with the citation. You can submit your citation to us directly for a free ticket review.