A Stop Sign Violation ticket will cost you $238 and Up in fines plus $1,000+ in insurance hikes and penalties. 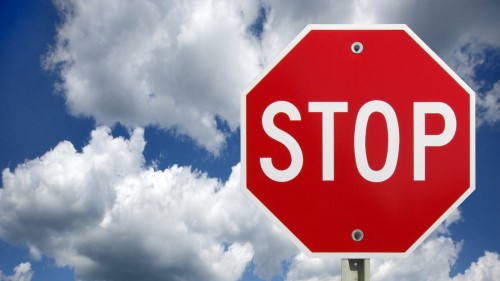 When we learn the basic rules of the road, we tend to consider traffic laws to be pretty straightforward. For example, most people think of section 22450 of the California Vehicle Code as “failure to stop at a stop sign.” However, the vehicle code denotes a number of “stop requirements” that go beyond the simple need to stop.

One key aspect of the vehicle code that determines how stop must be conducted is the location in which the stop is required. Were you at an intersection? A railroad crossing? Depending on the location, the law holds different regulations.

If the stop sign appears at an intersection, the driver must stop at the first of the following that the driver encounters:

If you find yourself at an intersection enforced by a stop sign but do not see a designated limit line, keep these additional indicators in mind to ensure you are following the law.

If the stop sign appears in front of a railway crossing, the driver must stop at the first of the following that the driver encounters:

The location of the “entrance” to the grade crossing is sometimes unclear, so ensure to use your best judgment. If you touch the track without stopping, however, you have gone too far.

Other Locations for California Vehicle Code 22450

A common example is a pedestrian crosswalk in the middle of a street that connects one shopping center to another. A local ordinance will likely provide that drivers need to stop at a stop sign governing that crosswalk before entering the crosswalk.

Regardless of the location, if the law requires a driver to stop before touching a limit line or crosswalk, the limit line or crosswalk must be visible. If it has not been repainted in some time, the lines might be too faint to give a driver notice of their existence. Keep in mind the secondary indicators noted in the vehicle code exist for this reason.

The law requires a driver to stop, but it does not require the driver to stop for any length of time. However, a stop occurs when the vehicle is no longer moving forward. 3 seconds is generally a good rule of thumb to ensure the vehicle is no longer in motion. Be aware that sometimes police officers mistake a very brief stop for the failure to stop.

“Stop or stopping” when prohibited shall mean any cessation of movement of a vehicle, whether occupied or not, except when necessary to avoid conflict with other traffic or in compliance with the direction of a police officer or official traffic control device or signal.

Though Californians joke about their affinity for the “California roll”, failing to stop at the stop sign is a serious matter in the eyes of the law.

The minimum fine for a violation of CVC 22450 is $238 and one point added to the offender’s driving record.

Were you cited for CVC 22450 and are concerned about the consequences? Reach out to our team for a free ticket review to learn more about your options.