A Open Container(s) ticket will cost you $366 and Up in fines plus $1,000+ in insurance hikes and penalties. 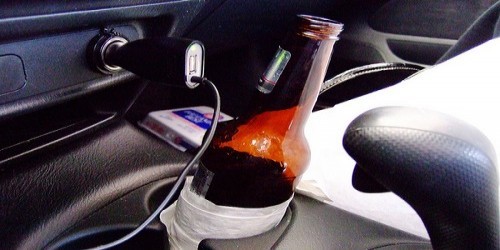 Driving under the influence of alcohol is the cause of so many dangerous accidents, it goes without saying that the penalties for doing so are steep, and rightfully so. And drinking while driving is one of the worst things a driver can do as it not only impairs driving by way of the alcohol’s effects, but it’s also a driving distraction in itself. So it’s no wonder that very strict laws have been enacted to reduce the number of drivers who do it. One of these laws prohibits the possession of open containers of alcohol by both drivers and passengers.

What Is An Open Container?

California Vehicle Code 23223 defines an open container as “any bottle, can, or other receptacle containing any alcoholic beverage that has been opened or a seal broken, or the contents of which have been partially removed.”

Quite simply, any vessel containing alcohol, which has ever been opened, is considered to be an open container and it is illegal to have it in a vehicle.

Can Anyone In A Vehicle Have an Open Container?

The code includes possession by both drivers and passengers. It doesn’t matter whether or not the alcohol is actively being consumed, it only matters that the container is in the vehicle and could be consumed. The only legal way to transport an opened container of alcohol is to put it in the trunk, and it is illegal for any person driving or riding in a vehicle to be in possession of an open container. Period.

Unfortunately, thousands of people are issued citations in the state of California every year for being in possession of an open container in a vehicle. Being saddled with a conviction could result in a substantial fine, receiving points on your driver’s license, increased insurance rates, and a host of other unpleasantries.

I Was Cited for Having An Open Container. Now What?

If you received a traffic ticket for having an open container you run the risk of a minimum fine of $366.

Challenging the citation is possible if you want to avoid these hefty penalties. Reach out to our team today to learn more about your options and to take advantage of the free ticket review.